On Tuesday, June 25, Ross Medical Education Center in Ontario celebrated seven years since it first opened. There was a ribbon cutting ceremony that took place, which local media and elected officials attended.

Over the past seven years, this campus has not only transformed the professional lives of many students, but it has also helped grow the economy of Ontario. The medical industry in the area is prospering as many new medical facilities are opening up and the demand for medical jobs is on the rise.

Ross is a perfect option for students who cannot fully commit to the normal four-year university program. It caters to their needs by offering flexible schedules and allowing them to complete their training in just a few short months. The goal is to provide proper training to students and get them out into the workforce as quickly as possible.

The number of students at the Ontario campus is quickly growing. There are approximately 100 students currently enrolled. The campus has three programs for students to choose from: Medical Insurance Billing and Office Administration, Pharmacy Technician, and Medical Assistant. 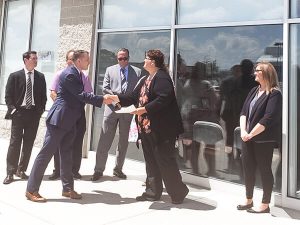 Heather Fox, who works for Career Services, expressed her excitement and passion for Ross Education, as she is a previous graduate from the MIBOA program. She stated, “I feel like I bring something special in the fact that I have been through this whole process just like the students. I understand the fears and frustrations they may be going through.”

Additionally, Fox believes that it’s so important to get the name out there, as she had several people attend who had no idea that Ross was right there in Ontario. The event attracted some media coverage, which will help potential students become familiar with the school.

The ribbon cutting ceremony served as an important reminder to the community that Ross has brought a lot of value to students and to the economy of Ontario over the past seven years. It continues to grow and it is always an option for students who want to take that next step in their professional careers.